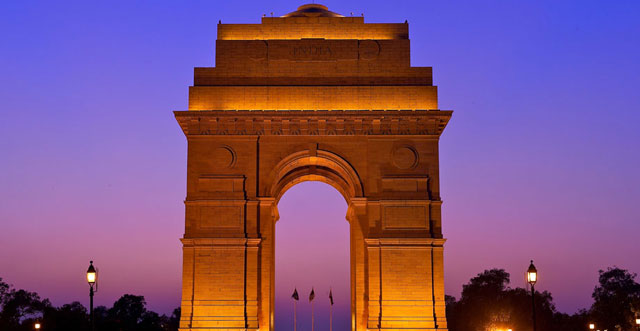 
Delhi, the capital of India, is situated in northern India and stands on the west bank of Yamuna River bounded by Uttar Pardesh and on the north, west and south by Haryana. Delhi is spread over an area of 1483 sq. kilometers, 216 meters above sealevel and has a population of around 14 million. The city has its historical importance for the fact that it has been the home to Mugal Empire. Delhi, as described by the famous poet Mirza Galib, is "The world is body and Delhi its soul".Apart from its historical importance, Delhi also happens to be the political hub of India, where every political activity in the country traces its roots to Delhi.

As per the study and sources, the name Delhi originated from the Persian word Dahleez (threshold or frontier) or from the name of a Mauryan king, Raja Dhillu. Another possible etymology is the city's original name Dhillika.

QUTUB MINAR -
The origins of Qutab Minar are shrouded in controversy. Some believe it was erected as a tower of victory to signify the beginning of the Muslim rule in India. Others say it served as a minaret to the muezzins to call the faithful to prayer. No one can, however, dispute that the tower is not only one of the finest monuments in India, but also in the world.


RED FORT -
So called because of the red stone with which it is built, the Red Fort is one of the most magnificent palaces in the world. India's history is also closely linked with this fort. It was frorth here ht the British deposed the last Mughal ruler, Bhadur Shah Zafar, marking the end of the three century long Mughal rule. It was also fromits ramparts that the first prime. Minister of India, pandit Jawharlal Nehru, announced to the nation that India was free form colonial rule.


HUMAYUN'S TOMB -
The mughals brought with them a love for gardens, fountains and water. The first mature example of Mughal architecture in India, Humayun's Tomb was built by the emperor's grieving widow, Haji Begum, in 1565 AD. Constructed with red sandstone and ornamented marks the beginning of a new tradition of ornate style which culminated in the Taj Mahal of Agra.


JANTAR MANTAR -
At first sight, the Jantar Mantar appears like a gallery of modern art. It is, however, an observatory. Sawai Jia Singh II of Jaipur (1699-1743), a keen astronomer and a noble in the Mughal court, was dissatisfied by the errors of brass and metal astronomical instruments.

Under patronage from the emperor, he set on himself the task of correcting the existing astronomical tables and updating the almanac with more reliable instruments. Delhi's Jantar Mantar is the first of the five observatories that he built with large masonary instruments.


JAMA MASJID -
Work on the Jama Masjid mosque was begun in 1650 by the Mughal Emperor Shah Jahan to complement his palace at the Red Fort.


INDIA GATE -
Built as a memorial to commemorate the 70,000 India soldiers killed in World War I, India Gate was designed by Sir Edwin Lutyens and completed in 1931. Located on Rajpath, the road which leads to the magnificent Rashtrapati Bhawan, the gate is 160 feet high with an arch of 138 feet.


RAJGHAT -
The mortal remains of Mahatma Gandhi were cremated on this spot on the west bank of the river Yamuna on the evening of January 31, 1948. A simple open platform inscribed with the Mahatma's last words, 'Hey Ram' (Oh God) is set in a garden with fountains and a variety of exotic trees.

In the Evening after Completion of Delhi Sight Seeing, Our Chauffer Will Drop You at Your Hotel with Sweet Memories of Same Day Delhi Tour.

We offers chauffeur driven car rentals in Delhi Agra & Jaipur City for both business and leisure. We have a large fleet of cars including, budget, standard, semi-deluxe, deluxe, semi-luxury and luxury cars. With our car rental services in Agra we also provide Agra half-day or full-day sightseeing tours by car of your choice.We also provide day return trips to different near by cities and tourists places by car of your choice.